A sermon by Michael Pahl on October 6, 2019, called “The Church is Like a Family,” reflecting on Mark 3:31-35. This is the fifth in a five-part series called “Together we are a Church.”

Here is a written excerpt from the conclusion: 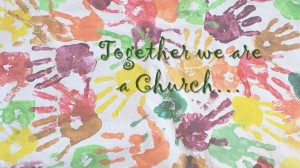 For the first three hundred years after Jesus, Christians were nothing close to a majority in the Roman Empire. They were a minority group, often ridiculed and despised.

People thought these Christians were cannibals because they talked about eating Jesus’ body and drinking Jesus’ blood. The wealthy and powerful looked on them with disdain because they were mostly made up of women and slaves and the poor. They were mocked because they worshiped a crucified convict as a god.

But one thing people couldn’t deny was that these Christians—who called each other “brothers” and “sisters” and called God their “Father”—these Christians cared for one another like true family. The early Christians distributed money and food to the widows among them, when these widows’ own families would not. The early Christians took in children off the streets, even babies who had been left outside to die, and adopted them as their own.

In other words, the early Christians welcomed into their “family of God” all those who had been cast out and cast aside by others, cast out from their own families and cast aside by society. And when these early Christians—these castoffs from the world—gathered together as “sisters” and “brothers,” they shared a meal together, all of them equal in status, every person leaving clothed and well-fed.

All of this was in direct response to the teaching and example of Jesus.

“Let the little children come to me,” Jesus says in Mark 10:14, “do not stop them; for it is to such as these that the kingdom of God belongs.”

“Whatever you do to the least of these brothers and sisters of mine”—feeding the hungry, clothing the naked, welcoming the stranger, caring for the sick, visiting the imprisoned—“you do to me,” Jesus says in Matthew 25:35-40.

“When you have a meal,” Jesus says in Luke 14:12-13, “do not invite your friends or your brothers or your relatives. Rather, invite the poor, the crippled, the lame, and the blind.”

“Here are my mother and my brothers and my sisters!” Jesus says in our passage, Mark 3:34-35. “Whoever does the will of God is my brother and sister and mother.”

And in Mark 10:29-30 Jesus gives this promise: “Any who have left home or brothers or sisters or mother or father or children for my sake and for the sake of the gospel, will receive a hundredfold in this age of homes, brothers and sisters, mothers and children”—finding belonging in the family of God.

We are the family of God. Jesus is our brother, God is our loving parent, and we who seek to follow Jesus’ way of love are siblings together. We belong to each other, bound together by mutual affinity and affection, these bonds strengthened by our shared experiences and our shared stories—especially the good news story of Jesus.

We are the family of God. May we continue to press into this reality, learning together afresh what it means for us to belong to one another, to share our lives together to strengthen those bonds of affinity and affection. And may we have the courage be the family of God in the world, loving one another in the way of Jesus—especially all those the world casts aside.